Welcome to Tamil Solidarity   Click to listen highlighted text! Welcome to Tamil Solidarity
The Tamil population in the UK showed up yet again outside the Sri Lankan High Commission in protest the 74th Independence day celebration.
Many diaspora organisation activists had weathered the cold and rain to show the world the hypocrisy of the Sri Lankan state celebrating independence whilst denying the rights of its minority population.
Tamils solidarity had also called a protest on this day with its key activists laying out the demands.  Some of the key demands were:
1. To get rid of the draconian prevention against terrorism act.
2. End the systemic agenda of land grab.
3. Defend the right to protest.
4. Stop the persecution of activists.
5. Pay rise for the hill country workers.
6. Say no to privatisation of Health and Education. 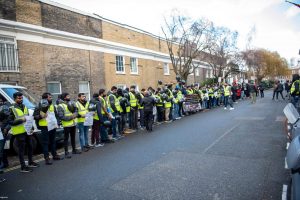 Its key members made clear today why the 13th amendment of the Sri Lankan constitution within the unitary state is not the solution to the 7 decades old conflict. The diaspora stands for the right to self-determination including separation.
Many protesters highlighted that the Sri Lankan state borrowing money to show the world a false picture; shelling out millions of rupees for celebrations whilst most of the country suffered from electricity cuts and the whole country continues to queue up for gas and other necessities.
With its foreign reserves dwindling along with its gold bullion,  the country spared no expense in extravaganza and grandeur painting a false picture to the rest of the world as to how well they are doing.
If you would like to be a part of Tamil Solidarity or would like to know the work we are involved in please feel free to visit our website call us or drop us a message on instagram or facebook.
Kethes
info@tamilsolidarity.org
SIGN NOW
609 signatures