Dayan Jayatilleka is fundamentally wrong. As usual. Being “progressive”, from his point of view, is limited to being “anti-LTTE”. “Peace”, in his view, is only attainable by decapitating the opposition.

In one of his recent article Dayan cites the killing of the LTTE and JVP leaders as the method of achieving peace. This article supposedly argues against the methods of the current foreign minister Mangala Samarawera in his dealing with the GTF. Violence and removing leaders may have helped to damage the movement or to postpone the struggle, but never solved anything. Causes of oppression and the struggles against it often last longer than the life span of one person. Without eliminating the fundamental causes no real solution can be found.

Like Dayan, many Sri Lankan so-called liberals justified the killings of tens of thousands of Tamils by characterising the LTTE as ‘fascists”. If they are fascist, then all sorts of violence against them becomes justifiable – that is the logic they go by. First, their definition of fascism is bewildering. Robert Paxton, know ‘fascism specialist’, links fascism to the ‘mass based party’. Can we quote Umberto Eco, another philosopher who wrote about fascism, to provide any flesh to the pointless arguments of Dayan? No. Still one has to prove how the LTTE had these qualities that characterise fascism as their core beliefs and strategy.

The Marxist understanding of fascism is nowhere in what Dayan believes. It may be the case that Dayan finds comfort from American Stalinists who in 1932 characterised Roosevelt as a fascist- mindless blinded method that only serves their own self interests. By the very standard that he uses one can easily characterise Mahinda Rajapaksa – who Dayan loyally served – also as a fascist. From Kashmir, Pashtun and Palestine to Kurdistan, we have seen bloody wars. No ‘pure’ struggle has ever existed against national oppression or against any oppression. In order to break the power base of the oppressors, struggling forces are at times forced to take a violent route. But the state uses violence to supress – to push back any attempt (whether the tactics are correct or not) to take society forward or to attempt to fix the fundamental causes of oppression that the masses face. 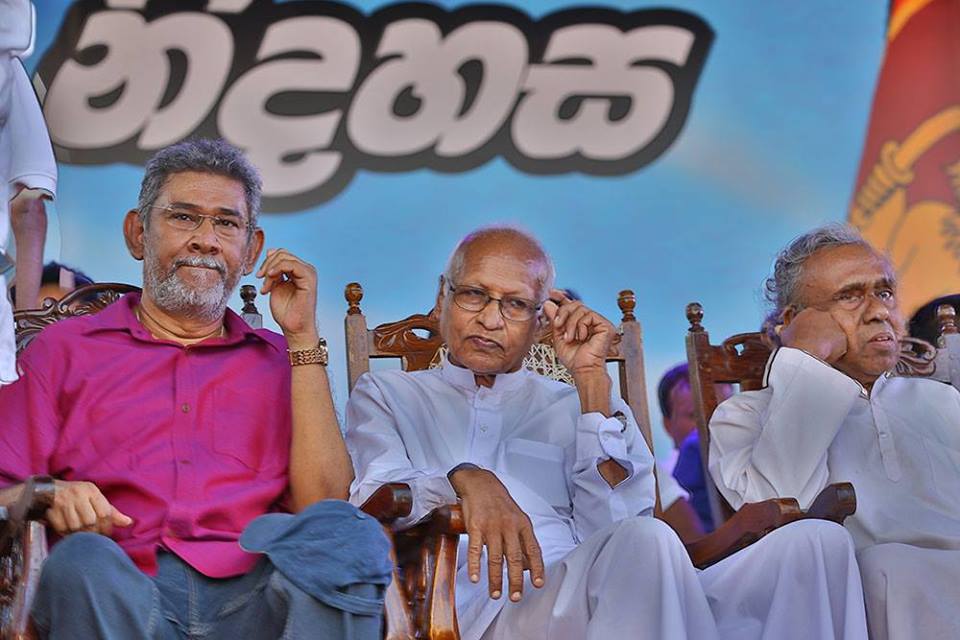 The war by the state brings further suppression, postpones the chance of emancipation and, in effect, strengthens the hands of reaction. Golden Dawn in Greece can be cited as an example here. But Dayan ridiculously argues that the “victorious war is a necessary precondition for peace”. This is what we can expect from someone who served the regime which led that massacre. If it is that easy we will now have peace in Iraq, Siriya and in many places. US government may have bombed out the planet for the ‘peace’ they so desire! Dayan basis always twigs from the defence of ‘Sinhala Buddhist nationalism’. He has no concern that his arguments can be politically and philosophically contradictory or lack any validity.

Dayan has one tool: Being anti-LTTE is a central theme that should define a ‘progressive’ and that should be the ‘test’ that the diaspora should pass before they can pass for ‘negotiability’. Whenever he talks about ‘political negotiations’ he means talks with the anti-LTTE centre and aims to strengthen it. He admits he did that when he was in France. He “promoted” something he calls “moderates, the progressives”. Thus he ridiculously argues the direction that the right-wing UNP foreign minister should have followed.

Dayan needs to learn a stark truth. The so called anti-LTTE centre that you are talking about – like Douglas Devananda who he thinks the government should have promoted against the TNA – is already with the government. There is nothing there to ‘win over’. The small number of individuals that Dayan associated with in France have no base in society. They are alienated individuals who live in the past and centre their whole existence around being anti-LTTE. You will never see them organise any public activity or take any respectable position within the society. It’s ludicrous to assume that Douglas can be established against the TNA or that these individuals can be an ally in bogus ‘peace negotiations’. It’s wrong to assume that the corrupted and politically bankrupt people can be elevated as leaders of the Tamils in Sri Lanka and in the diaspora with sheer will power of the state.

This is where the weakness of the recent Mangala-GTF talks can also be found. Contrary to Dayan’s argument, Mangala is correct in identifying the GTF as ‘moderates’. It is they who supported the Maithri-Ranil phalanx in the last presidential election. It is they who are prepared to talk to the Sri Lankan government. It is they who are prepared to compromise the national aspirations of the Tamils and drag out any attempts to solve any problems indefinitely. It is they who are prepared to go behind the business interests of the UNP. They share the same class interests with the UNP. They are ideal for ‘negotiating’. Hence they are “promoted” by the UNP and some Sri Lankan media. But unfortunately the truth is that the GTF also doesn’t have any base within the Tamil community. A few individuals who claim to be in the GTF are well-known in the community. It doesn’t mean that they have a support base. These individuals, along with a few TNA leaders face sharp criticism from the diaspora in general. Mass consciousness is far to the left of what the GTF, or Mangala imagines. The majority condemns the negotiations with the government – particularly the preparedness to compromise on delivering justice to those who committed war crimes. The majority of the diaspora will not support any group which is seen as compromising the national aspiration of the Tamils.

The nationally oppressed feeling is as alive today as in the 70s if not more so – not just in the diaspora but also in the north and east of Sri Lanka. This is why the TNA also panders to Tamil nationalism – in order to secure votes. In the last northern provincial election even the Douglas and Angajan camp often blasted from their stage that they are the true deliverers of ‘Tamil Eelam’. If Dayan is shrewd enough he would have noticed how the rhetoric of those ‘loyal Tamil allies’ had changed in recent times as they get more desperate for votes.

The point is to negotiate with the masses either in Sri Lanka or in the diaspora. There are many groups that represent the various interests of the diverse diaspora. The Tamil Solidarity campaign has always argued that any attempt to provide a solution should satisfy what the masses want. Without addressing the grievances of the masses, the mere mechanical process of hoping to install peace through a few self-serving individuals who are prepared to cooperate with the state is a sham strategy. A precondition for peace negotiations is a willingness to address the root cause of the problems that divide both parties. This means addressing the national aspirations, serving justice by prosecuting those who committed war crimes, and proposing a meaningful solution for co-existence. If that is a threat to ‘national sovereignty’, then it will always remain as such –and even pass the life span of Dayan existence.