In response to the military attack on protesters in Sri Lanka Tamil Solidarity had called for Solidarity protests to be held in London in front of the Sri Lankan high commission.

Here are the details 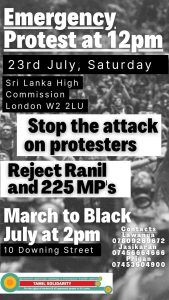 Following article is published in Socialsitworld.net

The heavy military moved into protest areas in Colombo last night and during early Friday morning, clearing out the area of demonstrators. The day before, arrest warrants were issued for student protest leaders. The new President, Ranil Wickremesinghe, issued an ‘official order’ to the military to “maintain public order” and listed key administrative areas to be protected. This, in effect, is bringing the whole country under military control. All 25 districts of Sri Lanka were listed in the presidential order to be brought under the control of armed forces. This action was taken soon after the same cabinet that existed under ousted Gotabaya’s presidency was reinstated. Prior to this, protesters demanded the immediate resignation of the newly appointed president, Ranil Wikramasinge, and all the 225 members of parliament.

The military clampdown may push back the protest movement temporarily. But given that anger and hatred of the elite are increasing among the masses, the repressive action can also lead to further escalation of protests.

The following article was written just before Friday’s events. Socialistworld.net will publish further updates and analyses on the developing situation in Sri Lanka.

The crisis in Sri Lanka is likely to escalate further, as protesters state that they will not accept the newly appointed president. Ranil Wickremesinghe (Ranil) was elected on 20 July 2022 by the Sri Lankan parliament as the new president. A determined mass movement had pushed the Rajapaksa family from power. President Gotabaya Rajapaksa was forced out and secretly fled the country. Though no one has so far seen the infamous ‘resignation’ email that Gotabaya sent from Singapore, the parliamentarians acted quickly to protect their continued grip on power.

Initially, total chaos existed, in terms of Gotabaya’s resignation and new appointments. In fact, the government was forced to spread the news of the resignation even before they received it, as the angry protest refused to leave the presidential residence they had occupied. Even without being formally appointed, Ranil began his role as acting president. Within hours, he had not hesitated to use executive powers to declare a state of emergency. He also put out vicious propaganda against the protesters, calling them “fascists”. He also ordered the armed forces to do whatever means necessary to protect parliament from the protesters.  At the same time, the travesty of electing a new president started.

Despite Gotabaya’s overwhelming rejection by the population, which caused him to flee the island even before he formally resigned, his MPs in the parliament then proceeded to ‘elect’ a new president (a president who under Sri Lanka’s current constitution has wide executive powers). This is a bogus ‘election’ whose aim is to give a ‘democratic’ cover to an attempt by a rejected regime to continue in power. It is a direct attack on the mass movement that has been demanding his resignation from the time he was appointed as prime minister following Mahinda Rajapaksa’s departure. The way this election was held also shows the utter contempt the current parliament has for democracy and the masses. Just to carry through this parliamentary manoeuvre against the desire of the masses, they used all power at their disposal. They brought the whole country to a standstill by implementing one of the most draconian ‘state of emergency’ decrees that the country has seen. Armed forces were mobilised in big numbers to protect the parliament and other state institutions. Behind-the-scenes negotiations, secret agreements, and manoeuvres took place in parliament resulting in three candidates nominating themselves to be president.

None of these candidates however had majority support in parliament. Rajapaksa’s close ally and known hard-line Sinhala nationalist, Dullas Alahapperuma, could no longer get the support of his own parliamentary party. He was also supported by Sajith Premadasa of Samagi Jana Balawegaya (SJB – a new party formed by Sajith after breaking from the conservative United National Party – UNP). Dullas and Sajith coming together was seen by many as a win for them as they represented the ruling party (which had 145 seats) and the main opposition (which had 54 seats). But Dullas only managed to win the support of 82 MPs. Anura Kumara Dissanayaka, leader of the left JVP, had 3 seats in parliament and obtained just those three votes. 134 MPs voted for Ranil who had no support till now. The once powerful UNP that Ranil led suffered a humiliating historical defeat in the 2020 parliamentary election, winning just 2.15% of the vote, losing 105 seats in the 225 seat parliament, a massive wipe-out. Ranil himself got very poor votes in that election. Having failed to win a single seat, Ranil was manoeuvred into parliament by obtaining one of the 29 seats allocated proportionally according to parties’ national votes. He has been prime minister six times before this. In each case, he never served a full term as PM.

Gotabaya’s flight abroad and the previous collapse of the UNP show that neither Ranil nor the remaining supporters of the Rajapaksa-led Sri Lanka Podujana Peramuna (SLPP) currently have popular support; in fact they are hated by the overwhelming majority.

However, Ranil is trying to show it is ‘business as usual’. His first act as a new president was to thank the security forces for protecting them. Not a single demand that the mass movement had put forward was accepted. He wants to continue in the post for another two years according to the reports. Abolishing the executive presidency that was demanded by the masses is ruled out for now as the government needs all its executive powers to combat the masses. The media reported a survey conducted by Verité Research that showed that 70% of the population wanted to abolish the executive presidency.

The protest movement also faces crucial questions in terms of how it continues to be organised and how it is going to advance its demands. The focus of the protesters has now shifted towards getting rid of Ranil (with the ‘Go home Ranil’ slogan). There is a lack of discussion and plan in terms of how the demand put forward by the Aragalaya (Struggle) movement can be achieved. More crucially, a vital discussion must now start in terms of what should follow if the masses are able to get rid of Ranil.

Ranil will attempt to present the old parliament as ‘new’. There will be an attempt to form a ‘national unity’ government and present it as an interim government. Trade unions must come forward to organise a general strike and coordinate it with a mass mobilisation to end the rule of Ranil. The United Socialist Party (CWI) argues that the mass movement must reject the bogus pretences of the government. Instead, democratic mass workers’ and popular organisations should be built to deliver on the demands of the masses and form the basis for a government that is by and for the working people, not the competing sections of the ruling class.