The international committee of the largest union UNISON had recently passed a motion showing solidarity with the struggle that is taking place in Sri Lanka.

Following is the Motion agreed by the UNISON international committee

Unison send it’s solidarity to the Trade Union Coordinating Committees that organised the Hartal (General Strike) on 6th May in Sri Lanka and continue to take strike action.

This action follows protests that have taken place over the year, particularly by young people against food price rises and shortages, fuel shortages, power outages and shortages of medical supplies. This is a result of many years of neo-liberal economic policies taken by successive governments which were taken at an increased pace by the corrupt Rajapaksa regime. One of the effects of the Hartal was the forced resignation of Mahinda Rajapaksa as Prime Minister.

We condemn the violence used against strikes and protesters by the regime including orders to shoot to kill. Some of this violence is directly organised by supporters of the Rajapaksa regime mobilising hooligan elements to attack rallies and demonstrations. This has caused uproar across Sri Lanka. We oppose the strict curfew imposed by the government which is restricting the right to organise.

Since the successful Hartal more action has been proposed and is taking place involving a variety of trade unions including all out strikes. We give full solidarity to those actions. It is essential that the trade unions take decisive action to end the suffering faced by the majority of the population. Trade union action can ensure the solidarity and unity of the movement.

The replacement prime minister, Wickramsinghe, has a history of using brutal repression. His solution is to turn to the IMF for loans to bail the government or of this economic crisis. This will only lead to further neo-liberal measures that would further weaken the economy and increase the debt burden, increase wealth inequalities and poverty. Far from solving the crisis it will lead to future struggles of workers and young people.

We support the protests in support of the protests taking part in the UK. We note that Tamil Solidarity, to whom we are affiliated has called demonstrations in support of the protests and against the attacks by the regime. We agree to make contact regarding any further actions they may call. We also agree to make direct contact with trade unions in Sri Lanka with the aim of developing links in particular with public sector trade unions to develop solidarity during this crisis. 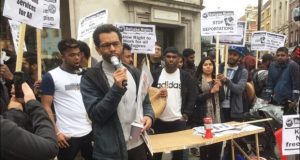