The European Union has decided to withdraw Sri Lanka’s preferential trade access to EU markets after it failed to improve its human rights record.

The concessions will be stopped on 15 August on a temporary basis after Sri Lanka refused to implement human right conventions.

The deal, known as GSP Plus, gives 16 developing countries trade benefits in return for set commitments.

Sri Lankan officials say the demands amount to interference in its affairs.

Last month, the government said the request was an insult to Sri Lankans and should be placed “in the dustbin”.

The Sri Lankan government has faced repeated accusations of human rights violations carried out during its civil war against Tamil Tiger rebels, which the military won in 2009.

The EU was particularly critical of alleged human rights abuses during the last stage of the war.

The move comes after the government failed to make a written promise of progress on three human rights conventions, which deal with torture, children’s rights, and civil and political rights.

“We very much regret the choice of Sri Lanka not to take up an offer made in good faith and in line with the EU commitment to a global human rights agenda,” EU foreign affairs chief, Catherine Ashton, said in a statement. 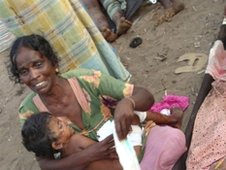 Correspondents say the move may not necessarily be a huge blow to the government, but could hit business hard.

Sri Lanka’s garments industry will likely be impacted the most, as it enjoys tax breaks to sell to retailers in Europe.

The BBC’s Charles Haviland in Colombo says that there are fears for the jobs of textile workers, although some clothing companies say the industry is so buoyant that they will not be affected.

The EU says it is open to talks in the future, but that it would depend on the island nation’s commitment to the charters and to working with the EU, our correspondent adds.

President Mahinda Rajaspaksa, who has often denounced foreign criticism, has shrugged off the decision, saying that they do not need the concessions.

“If the EU doesn’t want to give it, let them keep it. I don’t want it. We have gone and explained what we have done,” he said.